The Monster Librarian Presents: Reviews of Werewolf and Shapeshifter Fiction

Wolf Hunter has three interwoven plot threads. The first starts at the end of World War II. A group of Nazi scientists is preparing to initiate the final stage of tests that, if successful, would turn an ordinary soldier into the ultimate fighter—a werewolf. The fate of The Fatherland rests on the outcome of the tests. Unfortunately, the tests do not go as planned.

Skip ahead decades, to a young man on a mission to protect the secrets of shapeshifters for his Ojibwa tribe.  A shapeshifter known as a bearwalker, he is hunting a former Nazi who underwent the top secret testing.  He is to destroy all sources of the knowledge, perverted by the Nazis, which would harm the bearwalkers.

Finally, an unhappy college student, frustrated by his life and fascinated by the darker side of history and the occult, discovers clues that lead him closer to his ultimate desire.  Vague references to the Nazi werewolf experiments only serve to whet his appetite. He decides he must become one.  A few of the scientists are named, so he decides to reach out for some help…one way or the other.

This is a good read.  J. L. Benet starts out with an interesting way to create werewolves by having Nazi scientists bring the legend of the occult back to life.  This sets the stage for the themes of good vs. evil in the forms of selfishness and desire for world domination being countered by the desires for redemption and to set things right, no matter the cost. Benet does a good job balancing and tying together the three main characters’ plotlines.  The voice of each character is distinctive, which keeps the segments separated and also creates conflict between them as the story unfolds.  The suspense builds steadily as the story shifts through the three characters’ lives.  The action of the final climax is well-scripted as everyone converges for the birth of a new age or the preservation of the old one.  Benet’s descriptions are effective without being overdone—just enough to keep the story moving and the reader interested.  In the end, this is an interesting take on a classic creature. Recommended.

No full-moon madness, no contagious bites, no pack dynamics, no brooding-eyed pouty boys ready to rip off their shirts at a moment’s notice, and no tramp-stamp paranormal romance cover? Are you SURE this is a werewolf book?
Actually, it is; it just takes a look at several diverse and less-traditional approaches. From the opening scene when some chosen recruits undergo a Nazi experiment to create lycanthropic super-soldiers, to skinwalker spirit-mysticism and wanna-be Wiccans, there’s many paths the characters in WOLF HUNTER can follow in pursuit of their obsession. And none of them – the characters, that is, not the paths – are necessarily nice.
In fact, they’re pretty much a bunch of despicable, maladjusted losers. The guys are mostly bastards and abusive jerks; the girls are mostly needy and pathetic. Really, when the old Nazi is the most likeable and sympathetic? Eek.
Of course, what this boils down to is that it’s fun to see everybody getting the maulings and maimings they so richly deserve. It’s action-movie without the whole secret-hidden-society angles of the UNDERWORLD movie franchise or the White Wolf gaming line.
Despite some seeming inconsistencies, plot gaps and logic leaps that tripped me up a few times, I found it an entertaining read with good gore, vivid description, a smattering of perversity, and a neat blending of folklore and (mad) SCIENCE!!!

What they’re saying about Wolf Hunter:

“I know of two writers that I believe have the potential of rising out of the horror ghetto and producing books that the wider reading public will want to read despite the horror … one of them is Jack Kincaid and the other one is Jean-Loup Benét. Their work has heart. Yes, technically it is horror … it transcends the material that the majority of horror authors are content to produce.”
– Janrae Frank, World Fantasy Award-winning author of the Dark Brothers of the Light series

“I enjoyed it! … It’s well-written and accomplished and entertaining (and it has Nazis!)… It reminded me of classic-era Robert R. McCammon, and you can’t go wrong with that.”
– Brian Keene, Stoker Award-winning author of The Rising and Ghoul

“… has an imaginative, interesting plot … you get off some good licks and scenes like the medicine wheel scene (in which the dialogue is quite good)…”
– Jack Ketchum, Stoker Award-winning author of Off-Season and The Girl Next Door

“Benét reminds us in sickening detail that war can turn even the most benign men into beasts, leaving nothing in their wake but blood and guts and death.”
– Heidi Ruby Miller, co-editor of Many Genres, One Craft

I’m not normally a fan of werewolf novels for the same reason that I’m not really a fan of zombie stories – they all tend to use the same plot. Almost every werewolf novel is a mystery in which we have to figure out which of the various characters is the shapechanger. But there are always exceptions. Robert R. McCammon and Guy Endore come immediately to mind, and now J.L. Benet is added to that list. His werewolf is the result of Nazi experiments to create supersoldiers. After the war, the protagonist emigrates to the US where he tries, unsuccessfully, to keep his secret. A local researched investigating the Nazi experiments stumbles uncomfortably close, and there’s another shapeshifter who is determined to wipe out the German bred lycanthropes. There are bits of wartime thriller, contemporary adventure, and even a kind of urban fantasy motif in this always interesting and sometimes surprising thriller. 2/21/13
http://www.dondammassa.com/R3A2013.htm

Aware that the Third Reich was losing the war, Himmler authorized the creation of super soldiers. In a remote part of the Forest of Rhineland at Castle Schlosshuelchrath, scientists experiment in turning into werewolves Karl “Bear” Wahlsevski, Luther “Mountain” Grutzmann, Dr. Albrecht “Spy” Pactwandler and Hitler Youth Viktor Huelen. Luther dies while the other three succeeds but as Lycan they are uncontrollable. Viktor escapes settling in Michigan’s Upper Peninsula.

In the present, University of Michigan student Steve Williams is an obsessed genius researching the werewolf mythos with a particular interest in Dr. Worklauf’s Nazi Lycanthopker experiments as he has a compulsive need driving him. At the same time, Jack the Ojibwa shapeshifter, hunting the Lycan abominations, kills a dying Albrecht in Chicago. Meanwhile, knowing what Viktor is, Steve demands the Lycan convert him; while Jack seeks to kill the werewolf and the wannabe.

Fast-paced, the gripping brisk Nazi experiment subplot affirms that war brings out the best and the worst in people as each side will have amoral people willing to do anything to gain the victory. When the storyline changes into an exciting modern day urban fantasy, the well-written horror plot becomes typical of the genre. Wolf Hunter is an entertaining though provoking thriller. 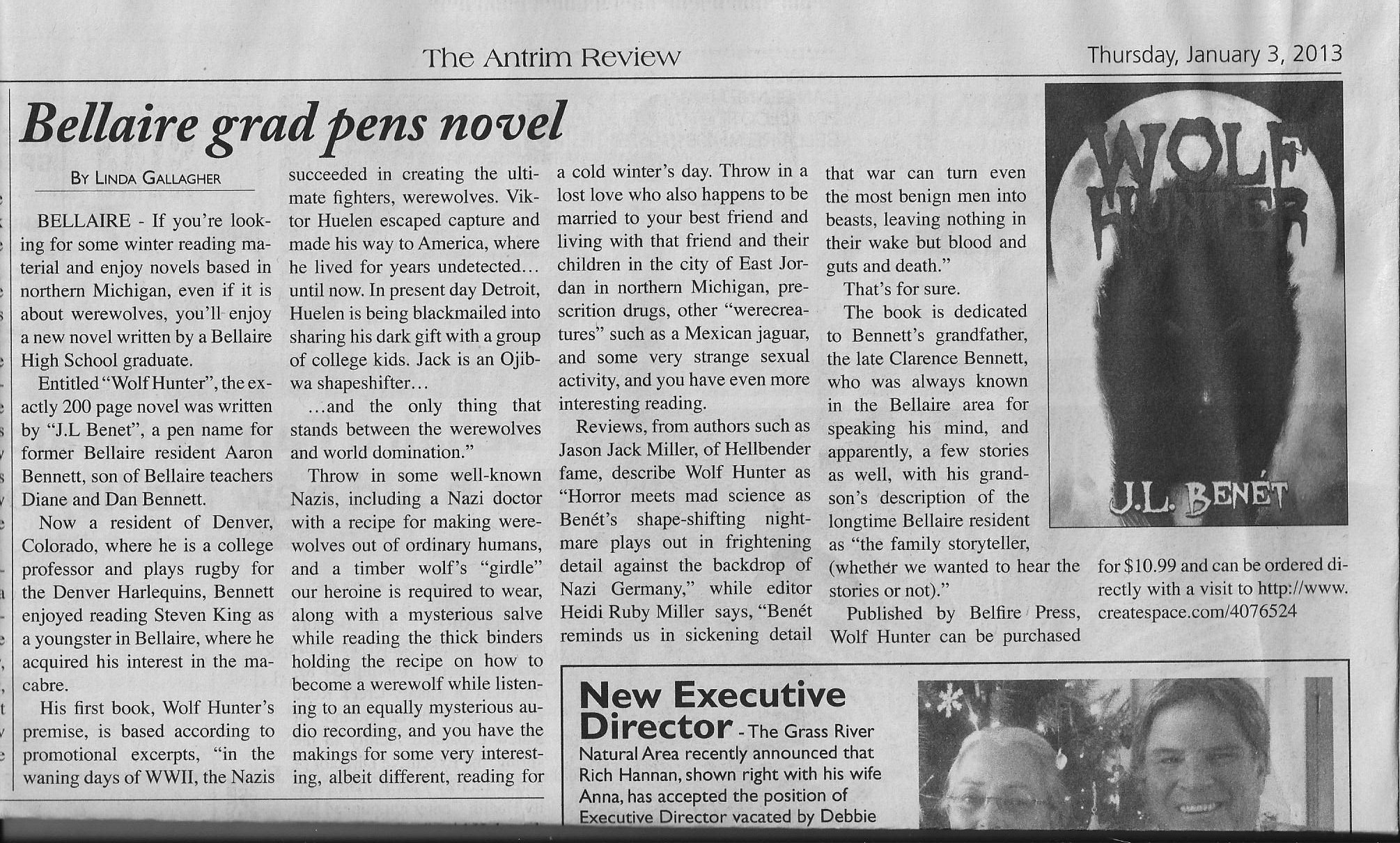 A nice article about Wolf Hunter in the Jan. 3rd edition of The Antrim Review.
http://www.antrimreview.net/

Check out the reviews on Amazon:
http://www.amazon.com/Wolf-Hunter-ebook/dp/B00AG5MVTC