Fans of the more classical tales of nightmarish werebeasts are in for a cool treat when they delve into the novel Wolf Hunter written by J.L. Benét. With striking imageries of anguished souls, hair-raising monsters, blood-soaked terror and violent action, Benét creates a world that blends dark fantasy and lifelike characters and situations into a story of horror fiction par excellence.

Part One takes the reader back to the declining days of World War II, where we learn about a Nazi named Viktor Huelen who has been unknowingly selected for an unconventional experiment. Benét’s style, from the opening scene to the end, perfectly sets the mood and captures the imagination in these bygone days, creating an overall sense of authenticity for the reader. Within the castled walls of Schloss Huelchrath, Huelen learns the shocking secrets of shapeshifting—or one method of it—and the horror of what it rightfully means. Although Nazi occult connections have been used many times in film and literature, Benét’s depiction is intriguing and doesn’t come across stock. In particular a curious auditory device he introduces us to called a Feraliminal Lycanthropizer.

Part Two expounds on the mystical legends of shapeshifters, presenting to us different paths and viewpoints. Jack (the book’s title-referenced protagonist,) with his Native American heritage, is given a mission to stop a sudden assembly of rogue werewolves, because he, like all the bearwalkers of his people, know mankind would consider them monsters and seek to destroy them all…him included.

Steve Williams, a college student who’s obsessively interested in werewolves, starts to explore the myths, trusting to find truth, and will give or do anything to become one. With the enlistment of a couple like-minded friends, and eventually Viktor Huelen himself, he stops at nothing to gain the knowledge he needs to become the wolf. The story plays out to a satisfying closure with the possibility of future trouble in a world where unnatural beasts gnash their bloodstained teeth at terror-stricken prey.

The author’s superb descriptive narrative in Wolf Hunter is both smart and stimulating. I was pleasantly surprised by the high caliber of the writing. Some standout marks are the ways in which the author describes the shapeshifting scenes. It’s done with a creativeness that successfully transports the reader and is never campy or dull. Of interest is the inclusion of projecting the wolf spirit. Also there’s a good explanation on the history of shapeshifters and some illumination on the Nazi development of such an experiment. There’s a scene with college students attending a free showing of the movie Cat People (1982) starring Nastassja Kinski, which I personally dug being referenced. All of the characters in Wolf Hunter are many-faceted, complex human beings, which only elevates the incredible story for the reader. One memorable example is when the author expresses Steve’s disposition and outlook on life through the character’s mixed-race personal experiences and how it could correlate with his desire to become a werewolf. Part man; part animal. Different than the masses. And also the way he tells and justifies Viktor Huelen’s reluctant involvement in reenacting the damned lycanthrope ritual so near to the end of his miserable life. He had me sold. The book does contain a smattering of profanity and explicit sex that may offend some. Perhaps my only one mouse-squeak complaint would be the author’s overuse of the word stoic. But, hey, what’s a balanced review without at least one gripe, right? Yep, that’s all I got here, folks.

Wolf Hunter by J.L. Benét is nothing short of a well-written and well-researched fantastic horror story, and it earns a place on my best-of-the-beast-novels shelf. 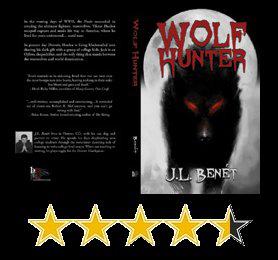